On the side of the 42,
a valley cuts into trees
to home telephone poles.
Further, swollen brick
houses, their elaborate
lawns, are undivided by
fences, though open
carry seems to draw
them closed, I’m sure,
by gun property sight lines.
On one of the lawns, an
afraid Native American
caricature is a bad statue
with hands posed
high above an inaccurate
headdress, an American
flag stabbed in the grass
next to him. I try
not to lose focus on the
road – a box that, if
you leave, you might die.
I stop by the Meijer,
and pass a small boy yelling
yee-haw as he waves on a
mechanical horse, while
his mother tries to split
a nickel into a childhood.

I’m specifically sipping on a Pacifico,
playing “Heart and Soul” on a street
piano in Petaluma. Along old building
fronts, magnets attach to hidden iron.
A bank vaults antiquities, Larami
Super Soakers from the 90’s and books
on tape, Guinness signs and a World War
II flare gun. I feel old and young,
peeling through plaster statuettes and die-
cast figurines and pages that were read to me
from the hands of my parents.
Outside, a fountain dates itself prior to Prohibition,
its inscription chanting the power of sobriety,
a purple shine to the puddle in its guts, and
a monument down street was made for
a man because of his charm (an arm
wrestling champion), the epitome
of a Petaluma resident, seeds and murals, the
bridge over the river. All of this can be seen
if looked for. The hill, in the rain, looks out
where the map says that one place used to be. 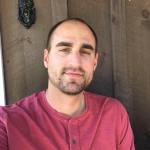 Jacob Minasian received his MFA in poetry from Saint Mary’s College of California, where he was the 2016 Academy of American Poets University and College Poetry Prize winner. His work has appeared in poets.org, Gyroscope Review, Causeway Lit, and Linden Avenue Literary Journal, among others. He currently lives in Cincinnati, Ohio.