Jane survived the mortgage crash professionally, but closed her satellite office, laid off all but a couple people. She tried to sell a house per month, a miniscule fraction of her average. It didn’t happen. We went so far into savings we had to leave a trail of bread crumbs to follow if we ever headed back. I sent angry letters to the Treasury Department. They dispatched federal agents to ask a few questions. Jane fell ill, but she’s better now. When the market corrected, so did her ulcers. She earned back our retirement fund. Even again at age sixty-five.

In the Location Business

Years before wildfire swept through our canyon, Jane assigned me a Great Circle route, where Home Depot was our North Pole. We bought ugly houses, sweated them into showplaces. Soon as I’d start to like one, we’d find buyers. She studied, got her broker’s license in 1995. By 2002, Jane stood twelve feet tall on a billboard our kids saw on their way home from school. Realtor of the Year, 2004. Before the mortgage bubble burst, she was insanely successful. I convinced myself she didn’t much need me anymore. Overnight sales crashed. The Great Recession saved our marriage. It’s complicated.

Bees like yellow houses best, Jane and I decided when we were in our third home, the second yellow one beloved by bees. That’s where we were when things happened that we’ll never tell our kids about. Our children mistake us for heroic figures. For God’s sake, no one correct them. Don’t say that Dad’s bad gambling problem spent the college funds. Don’t mention that Mom fell in at least Deep Like with the married guy next door, but finally broke it off. I ripped the fascia off that third house, pulled the hive out bare-handed. Sure, they stung me. 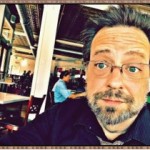 Todd Mercer was nominated for Best of the Net in 2018. His chapbook, Life-wish Maintenance is readable at Right Hand Pointing. Recent work appears in: Eunoia Review. The Lake, Mojave River Review, and Praxis.