I like to walk. I usually start at 3 a.m., when it’s nice and peaceful. The neighbors are all in bed, their curtains drawn.

On some streets, I smell dog piss. On others, I smell jasmine. One street, my favorite, is lined with rose bushes on both sides.

That’s the street where Mr. Flores lives. We’ve hardly exchanged more than a few conversations over the years. Someone told me he was from the Philippines. That’s where he goes every summer, with his blonde wife and their two boys. The house stays empty for a month or two. Then I see either him or his wife working on their front lawn. I wave, they wave back.

There’s one thing about him that has stuck in my mind.

It was the day after the towers fell. We watched it on the news: the smoke, the dazed people wandering the streets with their faces and clothes covered in white dust. None of us could find words.

That night, one of the neighbors put a single candle on his driveway as a symbol of mourning, and the rest of us followed suit. One candle in each driveway, for blocks. I remember standing on the sidewalk that night, watching as the candles guttered in the wind.

That’s when I started walking. It was maybe 2 a.m. when I walked down Mr. Flores’s street. Nothing caught my attention. The next night, I was back, and this time, I had to stop and stare. On Mr. Flores’s front lawn was a large screen. It was as big as one of those billboards you see lining 101 just west of the Bay Bridge.

The screen was lit with a glowing red 1. I shivered, though it wasn’t cold. I wondered what the number stood for. I passed his house again the very next night. This time, the number glowing on the screen was 2. Each night after that, I walked past his house. The number on the screen always increased by one. The screen was marking time of some sort, I knew that, but no explanation came from Mr. Flores and I felt it would be wrong to ask.

I didn’t know it then, but another person was also marking time, restlessly pacing the perimeters of a walled compound in Abbottabad.

Ten years after the towers fell, on a cool night in early May, a team of Navy seals sent by our 45th president breached the walls of the compound and killed Osama bin Laden. It was all over the news. When we heard, we crowded around the TV and whooped and cheered. I opened a bottle of 12-year-old Macallan that I’d been saving for my birthday.

It wasn’t until almost a week later that my memory stirred. Something felt wrong. I worried the notion, over and over. Finally, on that night’s walk, I realized the screen that used to be on Mr. Flores’s front lawn was gone. I stopped in front of it and stared, not quite believing, but there was no escaping it: Mr. Flores’s lawn was as peaceful and empty as it had been on the morning of September 11, 2001.

For a long time, I stood before the blank green square of my neighbor’s lawn and stared. Then I circled the block and came back. I did that three times.

Mr. Flores’s house is one of those low, ranch-type houses that used to be popular in the 1950s. At the far end of the yard, just in front of a large picture window, are masses of billowing red rhododendrons. The walk that leads to the front door is lined on both sides with lavender. I had loved this house for many years, loved the smell of the lavender and the baskets of red and purple geraniums that hung from the eaves.

I didn’t know if I loved it more because of the countdown screen, or whether I loved the house in spite of it.

But that night, that night when I realized the screen was gone for good, I knew I didn’t love the house any longer. The fragrant, deep red blooms of the roses next door, the roses that I’d been admiring only a few days ago, were no longer alluring. Now, for some reason, the deep red reminded me of funeral bouquets, whose overpowering sweetness always makes me feel faint.

At first, when I started doing this thing, this walking in the wee hours, my wife would wait up for me.

“Ed,” she would say, almost as soon as I walked in the door. “I don’t understand why you’re doing this. What’s troubling you?” Her gentle voice was sad.

I knew I loved her. I loved her more when she was anxious about me. So of course I loved her to a much greater degree at 5 a.m., when the sun was just beginning to appear over the rooftops.

After five or six years, though, my wife gave up. Her heart, she said, couldn’t take the strain. She said she had to sleep at a normal hour. She also moved her clothes out of our bedroom. Now she sleeps in the guest room on the first floor. Our two sons, Charlie and Michael, seem to have taken this in stride.

Both my sons attend private school. They have seen everything: been at parties where 45-year-old dads plied the high schoolers with beer or whiskey. When Charlie was a freshman, he saw Melissa, a girl he had a crush on, get so drunk she threw up in the host’s bathroom and passed out. Seven boys crowded the bathroom, for almost an hour. Melissa never woke up.

She wasn’t in school the next day. Or the next. Or the next. She was gone. No one missed her.  No one remembered her. Except Charlie. He’s a senior now, and I can count on the fingers of one hand the number of parties he’s attended. He saved up his allowance, set up a punching bag in the garage. I can hear him grunting against the bag, most nights. He won’t tell me what’s wrong.

My city is called Sequoia. Sometime in the past, there were stands of these trees covering the low hills of California. They must have been quite a sight when the first settlers came here. None of those giant trees remain. In their place are strip malls and suburbs, mile after mile of them, as far as the eye can see, and of course the grid of streets where I walk.

When I walk, I count off the intersections: Topaz, Jade, Ruby. Ruby has the nicest houses. At one end, the street slopes upwards. In the fall, when I’m driving home and the light hits the tree-tops at a particular angle, I have to hold my breath: there’s a blaze in those leaves. There’s heat and mystery. Then, a few weeks later, the trees are bare, and everything shuts down again, and I feel as if I’m sleepwalking.

I don’t know why, but all the neighbors on Ruby have only red roses. My wife tells me that there are different kinds of red roses. She shows me her gardening catalogs: There are Don Juans, and Mr. Lincolns, Playboys, and Starinas. And there’s a kind called All Dressed Up, which is a shrub rose, and not, my wife says, very vigorous.

My wife orders roses from the catalogs. They arrive in long cardboard boxes, a bundle of twigs. She used to be able to dig the planting holes by herself, but in the last couple of years, she asks our sons to do it for her. They complain a lot about it. A girl who lives down the street comes by sometimes to watch and stare. My wife wants the holes a foot-and-a-half deep, at least, because our soil is hardpan clay and the roses don’t grow well unless she mixes in stuff. It is hard work, this digging, and sometimes it takes my sons over an hour.

The girl down the street, whose name I don’t remember, sometimes looks at me with her eyes narrowed, and I wonder what she thinks. I look right back at her. If I’m feeling mean, I’ll start smoking. The smoke will waft over to her, and she’ll give a little grimace—kids of her generation, they hate old people like me who have nicotine-stained teeth and fingernails.  They’re all healthy—until they get into a car accident or dive into a pool drunk or collapse from a heart defect no one even knew they had.

But me, I love the smell of cigarette smoke. It deadens me to other things. And if smoking shortens my life by a decade or more—life’s a crapshoot—but I know it won’t. My younger sister, younger than me by seven years—she never smoked. Not after she turned twenty. She still developed emphysema. She got weaker, weaker, weaker. In the last year of her life, she couldn’t go anywhere without a tank of oxygen and a tube running out of her nose. Her kids were ashamed to be seen with her. Her skin got leathery, old-looking, even though she was only forty-five. She died five years ago. Her husband married again, and now I hear he has a little boy.

Every single person I know is going to die. No exceptions. It sometimes paralyzes me, the thought. The neighbor’s blonde twins, still in high school—in fifty, maybe sixty years, they’ll be gone, to be replaced by other teenagers. And no one outside the twins’ circle of family and friends will think anything of their absence.

How can others endure, I think. How? To think all this: my family, my wife and children, will one day be no more. They might leave behind traces, but so what? Perhaps my boys will have children, and perhaps those grandchildren will remember me. But in a few decades, even my grandsons will be replaced by people who will not regard me as a grandfather. They might not even know my name. The most I will be is a photograph in a picture frame.

Everywhere I look, there are people absorbed by what they are doing in the present, oblivious or indifferent to the fact that the future contains a non-commutable sentence.

Who created this situation? Who hated people that much? Who?

The days outgrow one another. God is in the details. I think of bringing something to Mr. Flores: a six-pack of Pacifico and maybe some tomatoes from the garden. It’s a Saturday, he should be home. I’ll ring the bell. If there isn’t an answer, I can see myself walking right in. Maybe he’ll be sitting on the couch, watching TV, the TV whose blue glow I see most nights when I walk past. He’ll look up. He’ll be surprised. I don’t think he’ll be angry. He knows who I am.

I’ll tell him all I’ve learned, the past ten years. I’ll tell him how difficult it is, to fall in love with something only to have to let it go. 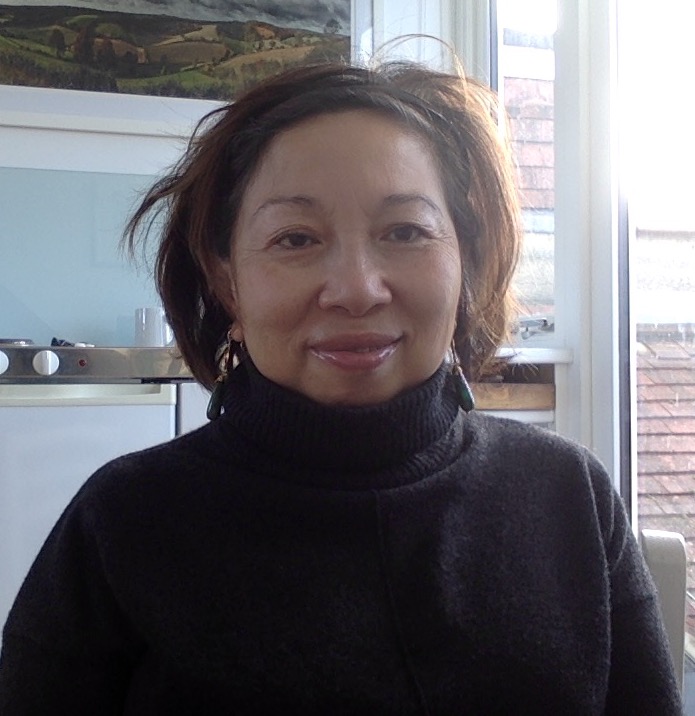 Marianne Villaneuva’s work has been published in Chattahoochee Review, Crab Orchard Review, Western Humanities Review, Juked, Pembroke Magazine, Vice-Versa, and many other print and online magazines. Born and raised in Manila, she received a creative writing fellowship from Stanford University and now lives in the San Francisco Bay Area. Currently, she teaches writing through UCLA Extension’s Writers Program. Her three published collections of short fiction are: Ginseng and Other Tales from Manila, Mayor of the Roses, and The Lost Language. She writes a humorous book and travel blog, Kanlaon and can be found on Instagram @iblieveindragons.