Time rattles at our window/Time trying to get in.

You told time by the sun when you worked

En plein air you were your own challenger

Then adhering to your set-up rituals

The unzippering of the case of oil-

Pastels the unfolding of the easel

The tying it to a filled gallon jug

Lest wind pick up by the side of the road

Or else by the bridge over the Maumee

There in Sidecut Park off the main highway

After balancing the board on your lap

You’d stake out hours on the bench

On the bank to let the current or the leaves

Or your divine selfishness lead you

I want to climb that the young woman announced

After she pulled off the road to take in

The smokestack of the abandoned Acme

From your canvas—so now I know no place

Is too incongruous for love or sex

How the relentless rust of this region

Between our towns could be worthy of love.

It was all you ever wanted you told me

In the mauve twilight of the nursing home

Where I rushed every blessed chance I could

And when “draw” was all you could say

You took the marker from me and moved it

In permanent black lines across the white

Board and what started as a star became

A compass a clock something to parse

That would collapse and devour you at last

Alone and afraid and me not there beside you. 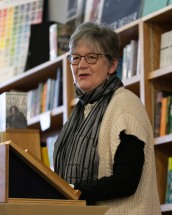 Terry Bohnhorst Blackhawk is the author of three chapbooks and five full-length poetry collections, with numerous publications and awards that include half a dozen Pushcart Prize nominations and the 2010 Pablo Neruda Prize from Nimrod International. Her first full-length collection, body & field (Michigan State Press, 1999), was a finalist in several first book contests, and Molly Peacock selected her second collection, Escape Artist (BkMk Press) for the 2003 John Ciardi Prize. Her fifth collection, One Less River (Mayapple Press), was named a Best 2019 Poetry Title by Kirkus Reviews. A Kresge Arts in Detroit Literary Fellow and retired Founding Director (1995-2015) of Detroit’s InsideOut Literary Arts Project, she divides her time between Detroit and her family in Connecticut.