I want to see the beauty and the strangeness in the last days of American spaceflight, in the last moments of something that used to be cited as what makes America great. I want to see the end of the story whose beginning was told by some of the writers I admire most. I want to know, most of all, what it means that we went to space for fifty years and that we won’t be going anymore. 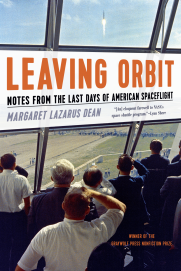 In Leaving Orbit: Notes from the Last Days of American Spaceflight, Margaret Lazarus Dean has her own mission: to observe and document the final launches of the space shuttles, seeking answers and meaning at this time of transition. From the beginning, in the Prologue, the author associates the American space program with loss and change. After her parents divorced, her father took his children to the Air and Space Museum on his weekends. Watching astronaut Judith Resnick float in the IMAX film “The Dream Is Alive” awakened Dean’s own dreams. Her love of spaceflight became rooted in intense sensory memories from weekends spent at the Museum, and also from her faith in adults: “despite their long and growing list of appalling limitations, grown-ups had at least done this: they had figured out how to fly to space.” The Challenger explosion and the death of Resnick became “a betrayal of our deepest trust,” an abrupt loss of innocence for teenage Dean. “[T]he adults in charge of making the world run smoothly actually had no idea what they were doing.” Dean’s writing chronicles more loss and betrayal as she witnesses and grieves the end of the American Space Shuttle program, writing with passion, authority, and audacity. “I have come to feel that the end of the space shuttle is going to be the ending of a story, the story of one of the truly great things my country has accomplished, and that I want to be the one to tell it.”

Dean’s exclusive knowledge and poetic sensory experiences establish the veracity of her writing and enchant the reader through these historic chapters: “the air-conditioned musty smell of Air and Space, the crisp homey smell of the cosmos, the floating black curls of Judith Resnick, and my father’s calm voice.” Yet throughout the book, hungry Dean longs for more, envying others, wanting all: “There are always people who know more, have seen more.” Documenting details, she eagerly notices the Days to Launch sign, and the worn places on walls where NASA employees have touched the missing landing dates for Challenger and Columbia. She is also an observer of language, from the “boom-boom” of journalists greeting each other after a landing, to “shuttle” (not “the shuttle”) when referring to the whole program. Dean shares smells, sounds, and sights, including the fact that space smells like “something cooked or burned.” The last launch of Atlantis has “brightness, the intense, orange flame that almost burns my eyes.”  A sonic boom, she says, is “like nothing I’ve ever heard before.”

“The sound goes right through you, and if you have been too emotionally involved in the space program, this sound will make you cry. It’s the sound of American exploration. . . .  We cry and tip our heads back to trace the bright light up.” Dean’s emotions impact her observations. She feels affection for the shuttles calling Challenger “a bear cub” and Endeavor a “quirky cousin.” Dean explicitly asks for “pity” more than once: “Pity those of us who were children in the flightless years of the late seventies. . .” Although emotional, her commentary provides insightful perspective. For example, while meeting Buzz Aldrin, she mourns a time “not too long in the future, when there will no longer be any living human beings who have walked on the moon, no more moon molecules lingering in the creases of aging men’s hands.” And she grieves the information lost in the engineers who will no longer have jobs at NASA. Fiercely loyal and in love, she expresses anger at the inauthenticity when a launch is re-created later at a ceremony: “There is something sacred about the poetry of countdown, and I feel it’s not to be evoked inappropriately.” Those accompanying Atlantis after its final flight are called “pallbearers” and the celebration afterwards “is not in fact a party but a wake.” She describes how the journalists applauded Atlantis, putting away cameras, clapping “until my palms sting” for “the great ship, now forever flightless.”

At the end of American spaceflight, Dean sees herself as a journalist and writer alongside Normal Mailer, Tom Wolfe, and Oriana Fallaci, incorporating their quotes into her own chapters. But she acknowledges she is witnessing the end of the shuttle program with “normal-looking, middle-aged people. . . floating in space” while Mailer, Wolfe, and Fallaci described the beginning of American spaceflight featuring elite male astronauts landing on the moon. A professor, she assigns Wolfe and Mailer in her creative nonfiction class, and she uses conversations with her students in the book to reveal how poorly informed the American public is, and how little younger generations understand about what we have achieved — and what we are losing — as a nation.

Leaving Orbit illustrates the current complexities of contemporary life, highlighting the changes of social media and reflecting aspects of creative nonfiction. Omar, one of the main characters, is a NASA employee she finds through a Facebook group, after he emailed her about her first novel. Through Twitter, Dean parties poolside with other space enthusiasts, including a scholar wearing a red swimsuit, enjoying pudding shots and “#Endless BBQ.” In her quest, the writer finds herself in “postmodern” experiences of this media age: knowing she was in an image of Cape Canaveral taken from the ISS, and also finding herself in a NASA video. True to the genre of creative nonfiction, Dean examines her own identity in this journey: “I’ve kept telling myself that I’m not one of the hard-core space people . . . . but I’m starting to question how different I really am.” And she also questions her own childhood memory of the Challenger disaster, discovering that the facts don’t fit with her impressions from that time.

Dean includes her struggles as a parent and as a wife and the ways her writing and research impact family life. While she has been traveling, her husband has given up his own writing in order to take care of their son, their boy who says “Face shuttle” while looking at her phone and has an astronaut-autographed picture of The Blue Marble on his bedroom wall. Like her notebook, cluttered with straw wrappers, ticket stubs, and grains of sand, roles and priorities in contemporary life are confusing and messy. She references Norman Mailer abandoning his kids to caretakers and multiple wives, “an important difference,” and grieves “a loss to men of his time that they were denied the pleasures of taking care of children.” More than once, Dean mentions John Glenn’s opinion that women should not be astronauts. When Karen Nyberg traveled into space, reporters labeled her astronaut husband “Mr. Mom,” singling him out for attention and disregarding Nyberg’s accomplishments. How can we pursue dreams and still be mothers and wives, and fathers and husbands? These also are questions of our time and culture in America, questions that evade easy answers. Decades and generations after The Mercury Seven, Dean reflects on the perpetual problems for women in spaceflight: “It’s a dream still, the dream of being allowed full participation. The dream is still alive, I suppose. The dream is still in the process of coming true.”

Dreams are a theme throughout this book; the word “dream” appearing in multiple contexts. Although Dean understands that “the dreams of space enthusiasts have been scaled back from the start,” she constantly questions what has happened to the American space program and how its vision decreased from Apollo moon landings to space shuttle orbits to nothing. Who is to blame for the end of American spaceflight? “The debate over whether it’s important for humans to go into space is a debate about the dream lives of taxpayers.” Dean points to a “feedback loop: as a nation, we elect representatives who thwart NASA and then we blame NASA for lack of vision.”  In her grief she believes: “We have no space vehicle any more. Like my students, the public needs to know that American spaceflight stopped and to feel sad about that, before they will clamor to rebuild it.” Is the Space Shuttle program a victim of our government and democracy? Or our own apathy? What if we the American people have betrayed ourselves in allowing this program to end? Is spaceflight “one of the truly great things my country has accomplished?” Did it start by “accident” as she proposes in a conversation near the end of the book?  Dean reluctantly reflects, in the final pages, “The whole thing depended on a confluence of forces that can’t be re-created. Those of us who love it should count ourselves lucky that it somehow accidentally happened at all, and, I suppose, we should accept the fact that it’s finally run its course.” In the future, Dean fears that spaceflight in America will become the privilege of the wealthy, run by private investors, inaccessible to the American public. Searching for elusive answers, she tosses difficult questions at the reader: “What does it mean to stop exploring? What does it mean to disappoint children? What does it mean to cancel the future?”

I came into the community of spaceflight enthusiasts through children, through my daughter who has wanted to be an astronaut for most of her life. Together with Michaela I’ve attended astronomy shows and NASA telecasts. Our family has met astronauts, visited both the Jet Propulsion Laboratory and Cape Canaveral, and even acquired a sticker badge from STS-120. As I write this review, more than four years after Dean attended the last launch of Atlantis, the Space Launch System has replaced the canceled Constellation plan, and NASA is opening applications for a new astronaut class. Thanks perhaps to “The Martian” movie and NASA’s One-Year experiment with the ISS, spaceflight has been prominent in the press in recent months, from Time to The Atlantic to Scientific American. “Birth of a Rocket” in the June 2015 Scientific American attempts to dismiss fears that the SLS is “a troubled Franken-rocket with stitched-together parts from a dead program.” Instead the author claims: “At the moment, there are no showstoppers in sight for the SLS.” NASA currently plans to visit an asteroid by 2025. The same generation as Dean, I would agree that this is not the space program of our childhood, of the 1970s and 80s, but I believe there is still time and space to dream. Dean describes writing the sentence “The story of American spaceflight is a story with many endings” although she does not know what to write next . I believe the story of American spaceflight is a story that does not yet have an ending. For her child and for mine, I will choose to believe “the dream is still in the process of coming true.”

Julie Jeanell Leungis a graduate of the Rainier Writing Workshop, the MFA program at Pacific Lutheran University. Her creative nonfiction has appeared in a number of publications, including the Bellingham Review and the Brevity blog, and she has also received the 2014 Living Earth Nonfiction Prize from Blue Lyra Review. A beach naturalist and citizen scientist, Julie lives with her family on Bainbridge Island where she can be found at low tide counting sea stars on the rocky shores. See more at http://gristjournal.com/proforma-julie-jeanell-leung/#sthash.xFtl17k0.dpuf