The Farm on Staten Island — Nonfiction by Robert Iulo

On their first Easter on Staten Island, my grandmother insisted her brother and his new wife come to Manhattan for dinner. She didn’t want them to be alone for the holiday on what she considered a remote island. A dinner guest might be expected to bring wine or dessert, but the brother I knew as Uncle Tony brought a young goat on a leash. His friends working at the ferry had let him take it aboard, but the driver wouldn’t allow an animal on the Broadway bus, and he was left to walk the three miles from the ferry to my grandmother’s on Mott Street. My mother remembered all the kids on the block being excited to see the goat, and the adults in the family, amused by her uncle’s country ways. Grandma didn’t want anything to do with a live animal so Uncle Tony took it into her tenement’s backyard, where it was slaughtered, dressed, and served at Easter dinner. The family accepted Tony’s behavior knowing that although he left the farm, the farm never left him.

Until the 1960s, Staten Island was still extremely rural, dotted with villages like New Dorp, Tottenville, and Eltingville, and interspersed with fields and woods. With his carpentry skills and the help of some friends, Uncle Tony built a house and then began to convert the land around it into something that would remind him of the Southern Italian countryside he had left behind. He went to Manhattan only for work at the Whitehall ferry slip or for an occasional wedding or funeral. He was always a gracious host, but didn’t like being a guest if it meant going to “The City.” Instead of the sounds of the farm animals and chirping birds he grew up with, he heard only the clamor of traffic. The tall buildings and crowded streets were nothing like the peaceful farmland he’d left behind in Salerno.

By the time I came along in the 1950s, Uncle Tony and Aunt Caroline had eight grown children plus grandchildren, and had since built a new and larger house toward the front of his property. Uncle Tony used the original house as a workshop and also as a chicken coop and rabbit hutch. The rabbits were for eating and he kept the chickens for eggs and some of the more exotic breeds just for show. He and I spent lots of time at the old house while the adults visited in the new one. There were always small song birds around the coop looking for spilled chicken feed. He would point them out and tell me what each was called. I think he preferred spending time with me, answering my endless questions rather than listening to family gossip. Looking back now, his property was probably no larger than half of a city block. Although in one of New York City’s five boroughs, how could a little boy from Manhattan not think of it as the farm on Staten Island?

Besides the rabbits and chickens, Uncle Tony also kept beehives. At first, I was afraid to go near them, but he said to me, “Robbie, don’t be scared of the bees. They won’t bother you if you don’t bother them.” Very good advice.

He gave me pieces of their honeycomb wax, dripping with honey, that I chewed like gum until the flavor was gone. Occasionally, the bees swarmed. When that happened, neighbors would let him know the bees were on their property, often found hanging in a tree. Sometimes he lulled them by spraying them with sugar water. As they ate the sugar, they clustered together into a tighter group. Other times he used a bee smoker to placate the angry bees. He’d cut off the branch they’d been attached to and lowered the cluster into a burlap sack. After tying the sack closed, he’d carry it back to his hives using the still attached branch as a handle.

He had a tree I thought came out of a fairy tale. Half of its branches grew deep red apples and the other half, pale green pears. I was bewildered, but he explained that since he didn’t have room for too many fruit trees, he planted an apple tree and then grafted a branch from a pear tree onto it. This brought him close to the level of a magician for me.

Everyone in the family knew I loved going to the farm on Staten Island. My mother’s brother, Uncle Jimmy, often took me along when he went to visit. One late summer day, he and I were walking through the property when we came across a fig tree heavy with ripe purple fruit.

Uncle Jimmy said, “Boy, you can’t get figs like these in a store. Let’s have some.”

He began picking them, one for me, one for him, until we’d eaten almost all the fruit on the tree. Suddenly, Uncle Tony came up behind us and said to Uncle Jimmy, “Caroline was waiting for those figs to ripen to make preserves and you, cafone, ate them all.”

It was the first time I’d ever seen him angry, but since his accusations were directed at Uncle Jimmy and not me, I wasn’t concerned. There he was, my white-haired Great Uncle Tony scolding my gray-haired Uncle Jimmy over some figs as if he were a little boy. Uncle Jimmy grinned and looked guilty while Uncle Tony seemed exasperated with his nephew. It all seemed so funny to me I couldn’t help laughing and soon my uncles were laughing too.

Aunt Caroline grew tomatoes and herbs just outside her kitchen door, and when she made a tomato-basil salad she put ice cubes in it because the ingredients were still hot from the sun. There was one dish her guests often hoped she’d make at lunch. She’d sauté chicken hearts in olive oil with crumpled dried hot peppers and wild mushrooms gathered by my uncle in the wilds of Staten Island: simple ingredients which came together as something very special. She’d hum as she chopped and the earthy smell of mushrooms and olive oil would fill the kitchen.

When he went to pick mushrooms he’d be gone all day, and Aunt Caroline would say, “He thinks I don’t know, but after he gets the mushrooms, he plays poker with his friends. As long as he brings me the mushrooms, I don’t say anything.”

The first time I can remember her serving the chicken hearts, she looked at me and without asking if I’d prefer it, cut a couple of slices of crusty Italian bread and spread it with cream cheese and Welch’s grape jelly. “Robbie’s American,” she said to my mother, “so I made him a sandwich I saw on television.” Glad to get the cream cheese and jelly at the time, I did eventually acquire a taste for her chicken hearts.

Nothing lasts forever, especially idylls. In the early 1960s, work began on the Verrazano Narrows Bridge to connect the boroughs of Brooklyn and Staten Island. As with many Robert Moses projects, the commissioner’s ego came before people’s homes and lives. Early in the project, he bulldozed a swathe from Brooklyn on the east, westward across the island to New Jersey, for what would become the Staten Island Expressway. To avoid public resistance, the land was quickly cleared of houses and vegetation long before any highway construction started. Because the boundary of the land taken for the highway was one block short of their property, my aunt and uncle’s farm was spared. My cousins and I often played in the newly created fields, as wide as a superhighway and the length of the island.

Whatever cleared land on Staten Island wasn’t paved, nature reclaimed. Being as wild and lush as it was, the exposed fertile soil filled in first with weeds, then blackberry and thorny wine berry patches. Ponds formed in depressions were discovered by ducks. We saw pheasants and red winged blackbirds, we chased possums and raccoons. It was as if the island itself was making a last attempt to preserve its pastoral character. This land sat idle and was our playground for months but eventually and inevitably fences went up and the construction began.

Whenever the ‘new bridge’ came up in conversation, my uncle shrugged and said nothing. I knew it affected him deeply and although I didn’t, he saw what was coming. The rustic spirit of Staten Island would give way to urbanization with an influx of people from the other boroughs. The island had not been very accessible, even with a ferry, but now, with a bridge, that would change. Within a few years of the Verrazano’s opening, Staten Island became an extension of Brooklyn. Even so, I’m glad it retained its old rural qualities during Uncle Tony’s lifetime. He gave me an appreciation of nature I never would have had growing up in a city as I did. I still live in New York, and on my twelfth floor balcony, I have some potted shrubs, a flowering vine and a small bird feeder. I think of the days I spent with Uncle Tony as I sit in my dining room and look through the window at the doves and finches and an occasional bee. They come for the seeds and flowers in Manhattan and bring back memories of the farm on Staten Island. 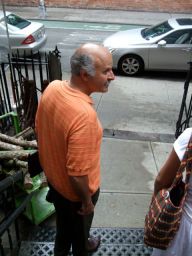 Robert Iulo’s work has appeared in Gastronomica, Hypertext, Blood and Thunder and others. He’s had a special feature published in the Mississippi Sun Herald about his volunteer work on the Mississippi Coast after Katrina.  He’s a native New Yorker and lives in New York City with his wife.