After the exhibit “In Living Color, Photographs by Saul Leiter,” Milwaukee
Museum of Art, 2006

No one knew what was going to happen in those days.
Between us and the Russians, we could kill the whole world
a few times over. New York was talking secession
and the President was talking into space. Meanwhile,
back on earth we were just inventing color.

Cheap stock might make a cluster of clementines
leap over an old man’s shoulder or turn
a shirt display into a flock of pigeons.
I think too much has been made of the “accidental”
in my work. There were accidents, sure—

I failed out of rabbinical school, got engaged too young,
hated Cleveland. An accident Kodak and I crossed paths
just when my painting was bad enough to quit.
But it wasn’t as if I walked around New York
jabbing my shutter while window shopping.

There were concerns guiding my work always.
For example, I thought a lot about frames.
Can a frame be a type of affection or
do we do violence with our unrelenting edges?
Also stripes, they change everything. They are

a fat cliché in the middle of a good poem. But
they are everywhere in this city. Can I ignore them?
That would be like buying a jazz record each Christmas
for your flamenco-loving girlfriend. But really
what is it to know a city? To represent it?
What is it to love a city that’s not your home?
~ ~  ~ 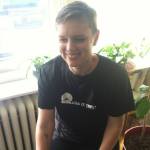 Elizabeth Hoover is a feminist poet who enjoys working on projects with a conceptual or research element. Her current project, Some Poems About Pictures is a hybrid text that offers art as a space for resistance to and transformation of dominant gender narratives. A portion of that project was awarded the 2015 StoryQuarterly essay prize, judged by Maggie Nelson. Her poetry has appeared in [Pank], The Los Angeles Review, and The Pinch, among others. She is a freelance book critic and lives in Pittsburgh with her partner and a cat named Brad. You can see more of her work at ehooverink.com.