He was a dropout, a hobo, an oyster poacher. He was an excellent sailor, a less-excellent rancher, a deeply committed socialist, a boxing fanatic, an early ecologist. He was an alcoholic, a voracious reader, a boat builder, a failed gold miner and, in the language of the day, “a bastard.” He was perhaps the greatest adventure writer America has ever produced.

And he was the first writer whose work I fell in love with.

I’ve got quite a few influences in my writing life. Hunter Thompson was the first writer that made we want to know the person behind the writing, and probably the writer most responsible for me starting to write on my own. But there are so many others. James Baldwin and his ability to cut to the core of his characters’ internal lives. Jorge Luis Borges and his labyrinthine mind. Hemingway’s crisp prose. Steinbeck’s ability to bring the epic into the mundane. Elmore Leonard’s dialogue. Mark Twain’s humor. Jeanette Winterson’s repetitive phrases. Alejo Carpentier’s music. Robert Penn Warren’s soaring rhetorical flights.

But when I read The Call of the Wild at the age of twelve, I became a fan of a specific writer for the first time.

I was a small, intensely frightened kid with a big mouth and a desperate, unstated desire to escape a home that always seemed on the edge of exploding. Perhaps that attracted me to extreme characters and impossible lives. I would stare at maps for hours, planning my various escapes. I would rifle through World Book Encyclopedias, watch movies set in far off lands. I wanted to inhale the world. Jack London seemed to have done that, and I didn’t just want to read his books—I wanted to imitate his life.

And what a life! His biography reads like a little boy’s adventure comic. He studies in a barroom, buys his own boat at thirteen. He works the rough and tumble waterfronts of the San Francisco Bay. He drops out of school to mine gold in the Klondike. He hops freight trains around the country and gets locked up for it. He builds his own boat and sails across the Pacific. And, most amazingly, he becomes a famous writer by writing, more or less, about his own life.

I wanted a life like that, full of courage and daring and impossible stories. I still do. But something faded in my affinity for London as time went on. As a kid, I Ioved his adventure stories and as a college student admired his commitment to the common man. But I couldn’t reconcile the socialist speeches with London’s ugly racist slashes at the great African-American boxer Jack Johnson, or his overbearing sense of nationalism (read: white supremacy) when he wrote about Chinese immigrants. It was ugly, and it was mean. And it turned me off to his writing for years.

As I’ve stumbled further and further into adulthood, I’ve found that most of the writers I’m drawn to have a lot of characteristics in common, characteristics like those of Jack London. The journalist’s drive to get straight to the story. An inherent dislike of authority and abuse of power. An overdeveloped sense of justice and the importance of the working man. An insatiable hunger for life.

And, in almost every case, at least one really ugly character flaw.

As you walk through Jack London Square on Oakland’s waterfront, you will find several historical markers that tell the story of the man, and of the city he came from. From Oakland’s origins as a spillover town during the madness of California’s Gold Rush, to its growth into a crucial railroad terminal, to its current status as a vitally important port, the town’s history speaks of movement. Of immigrants and transients. Of tough characters who crossed vast distances. Of people like the writer who became one of her most famous sons.

Almost by accident, I came upon Jack London’s old Yukon cabin. Half of it, anyway. It’s on a smooth, sandy section of the park in front of a small bar that I didn’t notice at first. The cabin was discovered at Jack London’s old claim site. Half of the cabin (I have no idea which half) was packed up and sent to Dawson City, while the other half was sent here and reconstructed. It’s small. Very small. I looked inside at the sparsely furnished little room, barely big enough for a man to sleep in, with windows that would have provided precious little light in the harsh northern winter. Even at twice its size, this would have been a hard place to live in, dwarfed by the immense landscape that surrounded it.

My gaze wandered back outside, to a strange little false-front bar that would seem to have no place in the modern architecture of Oakland’s shiny new waterfront: Heinold’s First and Last Chance Saloon.

This is an improbable place. Built in 1883 out of the remains of a whaling ship, the bar still stands on its original bones. Many of the pictures on the walls date back decades. Several hats and helmets line the ceiling, and God knows how far back they go. A pair of boxing gloves hang from the ceiling too. They once belonged to either Bob Fitzsimmons or Jim Jeffries (I was told both pairs were in there, but only located one) when they fought for the World Heavyweight Title in San Francisco in 1902.

But the bar’s most impressive feature is its angle. Basically, everything in Heinold’s slopes down.

In 1906, a massive earthquake struck San Francisco, resulting in a string of fires that destroyed nearly the entire city. Oakland was also damaged, and the floor at Heinold’s bar sank. Rather than rebuild, the bar re-opened, operating at an angle that no one has bothered to fix.

It’s one of the greatest bars I’ve ever been in.

“I bought it in 1984,” says Carol Brookman, who owns the property now.

“I didn’t ever see her in the bar. They said she didn’t come around a lot. She was older by then. I called her up and asked her if she’d be interested in selling and she said, ‘We should have lunch.’”

I didn’t realize Carol was the owner when we’d started talking. I just mentioned how much I liked the bar and she sat down with me. As it turns out, we were sitting at the exact table Jack London used to sit at while he did his schoolwork.

“Everything in here’s original except the chairs,” said Carol.

It’s appropriate that Carol became the owner of Jack London’s hangout. A native Iowan, she came to California as part of a series of adventures that took her all across the world.

“I made up my mind that I was going to spend every penny I had traveling the world and seeing everything I wanted to see before I settled down.”

She settled in Oakland, and strikes me now as the kind of person Jack London would have fallen in love with. Indeed, it was right in this bar that he started collecting material for his writing career, as well as inspiration for his travels. Sailors, longshoremen, miners, ship captains, railroad workers—they all came to Heinold’s. Many of them figured into London’s works, most notably in his autobiographical novel John Barleycorn, which makes frequent mention of the old saloon.

Carol and I talked for an hour, on every subject from marriage to traveling in Pakistan. She has piercing blue eyes and brims over with stories. I’m a pretty verbose man, but for most of that hour, I just sat back and listened. When she asked what I was doing in Oakland, I told her I was on a cross-country trip, and that I was hoping to spend the next few years traveling as much as possible.

She slapped my hand and said, “Good for you.”

When Jack London sat at that table in that bar, studying for school, he was about the same age I was when I started reading his books. Something came back together for me sitting there, talking to Carol—who might have been a kindred spirit, I imagine, of London’s. I visited Heinold’s four times in my last twenty-four hours in Oakland, and I’m sure I’ll be there again when I return in two weeks. I somehow managed to fall into the haunt of one of my earliest writing heroes, and in seeing this piece of his life, I believe I started to fall in love again with both his work and—warts and all—with the man.

As I write this, I’m in Hawaii, another place London loved and wrote about. I’m sitting at a table writing the story of my life as I’m living it. It occurs to me, decades later, that I’m still on Jack London’s trail. Following this life I fell in love with as a boy. And I’m still trying to give that twelve-year-old kid who couldn’t put those books down all the adventures he can handle. 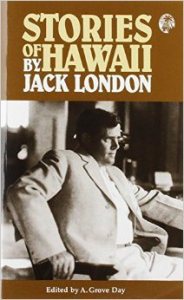 Nick Fox lives in New Orleans, where he works as a tour guide. He has also worked as a mule driver, a sailor, and an emcee for burlesque shows. He received his MFA in creative writing from Warren Wilson College and his bachelor’s degree in journalism from Northern Arizona University. His work has appeared in Third Coast and the Worcester Review. He is currently planning his next trip.  You can read more of Nick’s writing at nickfox.wordpress.com.