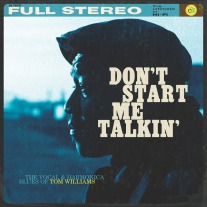 If, like me, you don’t know a lot about what it takes to master blues instrumentation and vocal expression, that’s OK. Musical knowledge is not requisite to enjoying Tom Williams’s (The Mimic’s Own Voice, 2011) charmingly sardonic novel set to the tune of Delta blues.

Don’t Start Me Talkin’ introduces us to Brother Ben, the only remaining True Delta Bluesman, who’s putting the finishing touches on his young protege Peter Owens while on their final North American tour together. Peter, aka Silent Sam, narrates this comedic road novel, which riffs on a chorus of themes, including mentor/protege relationships, perception vs reality, public vs private persona, the blues, African American culture, and roadtrip Americana.

The story opens with the two men preparing to transition back into their stage persona masquerade. They shop for wardrobe in two-for-a-dollar bins in stores along Crenshaw Boulevard in Los Angeles — a city built atop the entertainment industry and a mecca for pretense. At a nearby car dealership they purchase a flashy 1976 Fleetwood Brougham Cadillac as their touring vehicle. Ben wears tooth sleeves to give the appearance of gold teeth, because as Peter explains, “unless they’re dentures, a full set of pearly whites doesn’t correspond with songs about evil-hearted women and good old gin.” Ben has meticulously cultivated the mannerisms and ailments of a rough-living old man. “The first duty in life is to adopt a pose,” he tells Peter, quoting Oscar Wilde. “Don’t let the truth get in the way of the story they want to hear.” Yet in reality, he’s an evangelist for healthy eating, dental hygiene, clean living, safe driving, practical investments and smart financial planning. “Back home in Biloxi, where none of his condo-association neighbors knows him as anything but Wilton Mabry, a retiree who’s always up for eighteen [holes of golf], a Volvo quietly resides in his garage. ‘The safety record, Pete,’ he claims. ‘Plus those new seat warmers are a dream.’”

Meanwhile, Peter’s alter-ego Silent Sam is inarticulate and near-illiterate. He feigns to be Mississippi’s native son. In real life, he attended prep school in Detroit, “dressed like everyone else in a rugby shirt and Weejuns,” played ice hockey, and graduated cum laude with a marketing degree from Michigan State. Five years back, he skipped a lucrative job with a marketing firm in Cleveland to hit the road with Brother Ben. Pete recalls from his degree courses: “There’s no need for the genuine if your clientele believes what they’re getting is real. I’ve learned that same lesson from Ben, who could have been tenured in the business and music departments and taught the best black studies class you could take.”

As an act Ben and Sam are mentor/protege, the Last True Delta Bluesman and the blues harmonica player to whom he’ll pass his baton. But as with every aspect of their partnership, there’s more than meets the eye. Since Peter has grown up without a dad, he looks to Ben as a father figure. Much of the tension in the novel centers around Pete’s pushback against Ben’s wisdom. Yet a young man, he wonders at his place in the world: “Where I belong other than the stage is still an open question.”

The title Don’t Start Me Talkin’ serves dual purposes. It cautions against Silent Sam breaking his silence, against blowing his and Brother Ben’s cover, and against pounding the final coffin nail in an ancient musical tradition. Borrowed from the Sonny Boy Williamson song of the same name, the title also pays homage to the blues. Each of the twelve chapters borrows its title from the discography of the famed blues harmonica player and singer/songwriter. Like its “true bluesmen” characters, Don’t Start Me Talkin’ the novel never loses sight of its own entertainment value, both in terms of plot and packaging, with the book’s design working in concert with its theme — its cover resembling a record album/CD, its table of contents mimicking an LP label, its 12-chapter format similar to a 12-song LP and paralleling the twelve bars in which blues is typically composed.

Thus, the book itself adopts a pose, in that complicated paradoxes lurk beneath its clever cover, simple episodic format, and comedic tone. In an interview with latelastnightbooks.com, Tom Williams spoke of one such paradox: “[creating] a bond with your fellow man so you can stay away from him when you’re not performing.” In the novel, the two African-American musicians not only navigate their Cadillac from gig to gig. They must also navigate American cultural expectations. Says Pete: “Most brothers had at least one voice for work and another for home… the kind my mother taught me to shape for those who’d be deciding if I could have a credit card or a college education.”

Upon reading Williams’s latest novel, it’s difficult not to appreciate the author’s layer upon layer of irony — the possibility that Don’t Start Me Talkin’ just might start folks talking about America’s weird cultural landscape, African-American culture, appearances versus realities, masters and students, fathers and sons, the blues and its metaphors. It’s an easy book to appreciate on so many levels. Don’t start me gushin’.