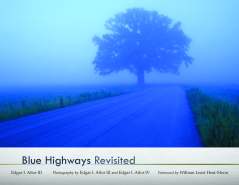 On a dismal morning in March, 1978, William Least Heat-Moon left Columbia, Missouri, on Interstate 70. It was “the fastest route east out of the homeland,” he would later write, and the starting point of what would be a remarkable and influential journey through the continental United States. At the time Heat-Moon was thirty-eight years old. His teaching job at Stephens College had been eliminated and a separation from his wife of ten years appeared to be permanent. Driven by “a nearly desperate sense of isolation,” he left Missouri determined to make a journey solely on “blue highways”—the writer’s now-iconic term for the back roads he assiduously studied on U.S. road maps. Eighty-two days later, after traveling through thirty-eight states and over 13,889 miles, Heat-Moon’s journey became the basis for the travel memoir Blue Highways: A Journey into America.

The book was released in January of 1983. That same month, a physician in Columbia, Edgar Ailor, received a copy from his wife. Ailor read the book that night, in nearly one sitting, and was immediately taken with the idea of exploring the country’s lesser-known places. Almost  thirty years would pass before Ailor could make his own journey to what has come to be called “blue-highway America,” but fortuitously, Heat-Moon lived in the same rural area southwest of Columbia, and eventually the two met and began what would be a longtime friendship.

Blue Highways brought William Least Heat-Moon immediate recognition. Called “a masterpiece” by Robert Penn Warren, the book spent forty-two weeks on the New York Times Bestseller list and has since become an American classic. The account is a highly personal one, filled with close observation, dry wit and keen style, but unlike many travel memoirs, Blue Highways reveals little of the author’s personal backstory, and only rarely refers back to the journey’s inciting events. “When memory is too much,” Heat-Moon writes, “turn to the eye. So I watched particularities.” Indeed, Heat-Moon’s gaze is for the most part outward, and in precise and artful prose depicts the world he finds in the streets of little known towns, or along deserted roads, or in backwoods as he searches for an ancestor’s grave.

The friendship between Edgar Ailor and William Least Heat-Moon led to a pitch over lunch one afternoon. What if, Ailor proposed, he was to revisit the route and photograph the locales in Blue Highways? Over the years, Heat-Moon was often asked if he planned to make the journey again (he didn’t), and “pleased but skeptical” about Ailor’s project, he gave his endorsement. Encouraged by his wife, Ed Ailor took an early retirement from his medical practice. He collaborated with his son, Edgar Ailor IV (or Gar), a professional photographer, and soon had project plans underway. By this time, father and son had opened a photography studio in Columbia, and practical concerns made it impossible to leave home for an extended time, so the trip was made in segments, a total of thirteen between 2006 and 2008.

The result is Blue Highways Revisited, a stunning volume of illustrative photographs that retraces the journey Heat-Moon made in his original book. Revisited makes for a wonderful pictorial companion, while it expands on the original with added histories, conversations with Heat-Moon, and photographs of Blue Highways objects and ephemera.

For fans of the original book, and they are legion, the release of Blue Highways Revisited must surely be a satisfying moment. The Ailors’ have succeeded in translating Heat-Moon’s textual mood to visual form, and their images strike all the right notes. From the painterly majesty of the landscapes, to the modest front of a small town diner, the virtuoso elegance of the Ailors’ technique combined with the humble subject matter echoes in tone Heat-Moon’s straightforward yet erudite prose style. Moreover, Blue Highways devotees are sure to appreciate the museum-quality photos of Heat-Moon’s travel gear—his Olympia portable typewriter, for example, and Nikon cameras, the pages from his notebook. There are also reproductions of the manuscript in-progress  (page 1, chapter 1), which provide a fascinating view into the writer’s process. Of the book’s opening paragraph, he says, “—it’s only about a hundred words—I rewrote two dozen times.”

For the Ailors, the original served both as a guiding vision and a kind of field companion. “With Heat-Moon’s eloquent, graphic, and exacting descriptions,” they write in the preface, “we found driving along the same highways often resulted in a vivid sense of deja vu. Time after time, a scene from the book came into focus around a bend or over a hill. We stepped off the pages of the book to recapture an experience recorded thirty years prior.”

The book’s large format and heavy stock set off the fine detail of the images. The clarity enhances the long shots and vistas, as well as the more intimate views. Whether shooting complex detail or the boldly graphic, the Ailors’ strong sense of color, gesture and design makes for stunning images.

Take for example “Hat Creek, California, on Route 89.” The careful arrangement of mountains, forest and water suggests paintings of The Hudson River School, or Albert Bierstadt’s landscapes of Yosemite Valley. The detail does not overwhelm, but lends an immediacy. You can almost feel the water that was snow the night before.

It was just after bathing in the ice-cold stream and toweling off that Heat-moon saw a camper pull in. Shortly thereafter he was approached by a nearly blind Pekinese dog named Bill, and then by its owner, a man in cowboy boots with a mane of white hair and a “face so gullied even the Soil Conservation Commission couldn’t have reclaimed it.” But Heat-Moon could still see mischief in the man’s eyes.

In North Dakota, Ailor photographed “Fenceposts against the sky.” In the foreground, two askew two posts are tethered by fallen barbed wire, and the beyond, the distance is arranged in strata of prairie grass and cumulus-filled sky. It’s a plain-spoken photograph of a humble subject made elegant, and set alongside Heat-Moon’s text, becomes both an illustration of the passage and a contemplative device:

North Dakota up here was a curveless place; not just roads but land, people too, and the flight of birds. Things were angular: fenceposts against the sky, the line of a jaw, the ways of mind, the lay of crops.

For reference, the page numbers from the original book are included with each photograph, and many images are accompanied by excerpts of text. There are also accounts of reunions with Blue Highways “characters,” eleven of whom Ailor was able to locate, and Heat-Moon’s original photographs appear alongside the Ailor’s current ones. There is, for example, Brother Patrick Duffy, Father Duffy now, whom Heat-Moon met at the Monastery of the Holy Spirit in Conyers, Georgia. At the time, Brother Duffy, who was once Patrolman Duffy in Brooklyn’s Bedford-Stuyvesant, shared his story about leaving the secular life for the hermitic. In this update, he tells the Ailors of the fan mail he received from seekers after the book came out. “It was a pain in the ass,” he dryly reports.

These then-and-now portraits are one of the many pleasures of Blue Highways Revisited. In addition, the Ailors make observations of their own journeys, and in-between, include illuminating conversations with Heat-Moon (who also contributes a foreword).

This tribute to Blue Highways comes at a great time. This year marks the thirtieth anniversary of the book’s release, and last month, Heat-Moon published his latest collection of essays, Here, There, Elsewhere: Stories from the Road.

Heat-Moon has long been considered a contemporary adventurer in the literary/historical vein, but he is also an innovator of the form. In 1999, he published PrairyErth (Deep Map): An Epic History of the Tall Grass Prairie Country. That book, which unpacks a complex portrait of the prairies and grasslands of Chase County, Kansas, spawned a category of literary exploration known as “deep mapping.” A deep map work of writing most often centers on place, usually small and almost always rural, and draws on eclectic sources.[1] Alongside traditional tools of reportage and research, deep mapping uses fields of study once considered outside the tradition of history-based topography, such as geology, archeology and weather; folklore and art; autobiography and memory. In Blue Highways, there is reportage and history alongside folk lyrics, genealogy, the poetry of Walt Whitman, vintage baseball terminology. With its rich digressions of history and social portraits, Blue Highways appears to have been the first step toward the deep map form.

I was heading toward those little towns that get on the map—if they get on at all—only because some cartographer has blank space to fill: Remote, Oregon; Simplicity, Virginia; New Freedom, Pennsylvania; New Hope, Tennessee; Why, Arizona, Whynot, Mississippi.

This impulse for uncovering the “little” places is at work in the Ailors’ book. One can sense Heat-Moon’s prose in the photographs of ice sheets and calendar-wall cafés, in a crooked highway, a leaning barn. Yet at the same time, the photographer’s sensibility is always present. There’s a collaborative energy moving between image and text, author and photographers, and between these journeys taken decades apart. The connections are fascinating to follow, perhaps in the same way the places along the highways were—first for Heat-Moon, then the Ailors. In this way, Blue Highways Revisited is a wonderful doubling of experience, and the collaboration makes for a new, and newly vivid, account of the journey.

*Click here for a map of the route Heat-Moon followed on the original Blue Highways journey.