For the most part, the song “Hug My Dog” is a simple plea to the heavens to let me get back home. Offering up a compromise. If I should make it back, I’d give up my rowdy ways. Put the plug in the jug, if you will. I was playing a two-night gig in this garbage resort town east of Cleveland. After the first show, I went out on the town with a couple of the friendly bartenders who’d been so kindly serving me double IPA’s all night. I didn’t know what sort of godforsaken place I was in, but I was along for the ride. The night eventually ended back at one of the bartender’s houses. Things got blurry.

When I woke in the morning, my head pounded and as soon as I realized I wasn’t at home, my heart sank. All I kept thinking was that I wished I was at home giving my dog Wayne a big old hug. He’s getting old and blind and deaf, but in the morning all he wants to do is be as near to me as possible. I “rescued” him four years ago now and he’s my best friend. Every day when I get home from work, I have to let him lick my face for a couple minutes before he even thinks about going outside. The first night I had him, we just sat on the couch and listened to Jim Croce.

What was he thinking this morning? I’m pretty sure every time I walk out the front door he thinks I’m leaving forever. He was probably looking around for me, and I was in some bartender’s bed who was now in the living room talking too loudly about getting Bloody Marys. She had to get into work soon and open up the bar. I still had to play a four hour set that afternoon. Then haggle about getting paid. Then pack up my gear and hightail it back across the state. All I really wanted to do was be at home hugging my dog. That wasn’t the situation I was in though.

I drank the Bloody Marys. I played the set. I made it home. Wayne got a big old hug. (I’m going to go give him another one right now.) Then I wrote a song. I never gave up my rowdy ways. 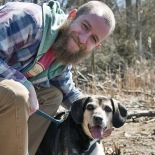 Craig James Ackerman is a songwriter/guitar player/laborer/wannabe writer from rural Northwest Ohio. He’s been playing his own honest brand of bluesy/roots music over the Rust Belt region over the last decade. For the last few years he’s been the lead guitar player for the Toledo based band Ryan Roth and the Sideshow. He continues to put out albums on his independent record label, Midwestern Front Records, while playing frequently around the region.