I began my FRONTEXTO project, (the term frontexto is a blend of frontera and texto, border/text) on New Year’s Day of 2018 because teaching full-time left me without time to write during the long semesters. And so, so I challenged myself to carve some time out of the day, or evening, to write. It was also a way for me to commit myself more fully to my art and to stop making excuses as to why I was not producing work, which often had to do with the lack of time.

Since January 1, I have been writing a poem in Spanish every day and publishing it on social media. The text is usually accompanied by an image sketched (usually) on a Moleskin 3.5” x 5.5”. This paper lends itself nicely to the smearing of ink, which is part of my technique, and the size of the page creates limitations that lead me to consider issues of scope in terms of text and image.  Sometimes the text covers most of the page; other times, it is the image that takes over. Almost always the text and image correspond in some way. Overall, lyricism and brevity are at the core of these visual poems. Recently, I have been using color, which opens more possibilities for the image and also for the text.

I decided to write in Spanish so I could think and feel in a language I am fluent in, but that I needed to practice. I wanted to become intimate with it and add more layers and nuances to the frontera Spanish I grew up speaking. Also, in these tumultuous times in the United States, where people are being attacked and discriminated against for speaking Spanish, I consider that writing it, and speaking it, is a way to resist anti-immigrant rhetoric and policies.

Currently, I have an exhibit, titled, “Frontextos: A Return Home” at the Weslaco Museum. My visual work has also been featured at the AllState Almaguer art space in Mission, TX and an exhibit is forthcoming at the Centro Cultural Hispano de San Marcos. 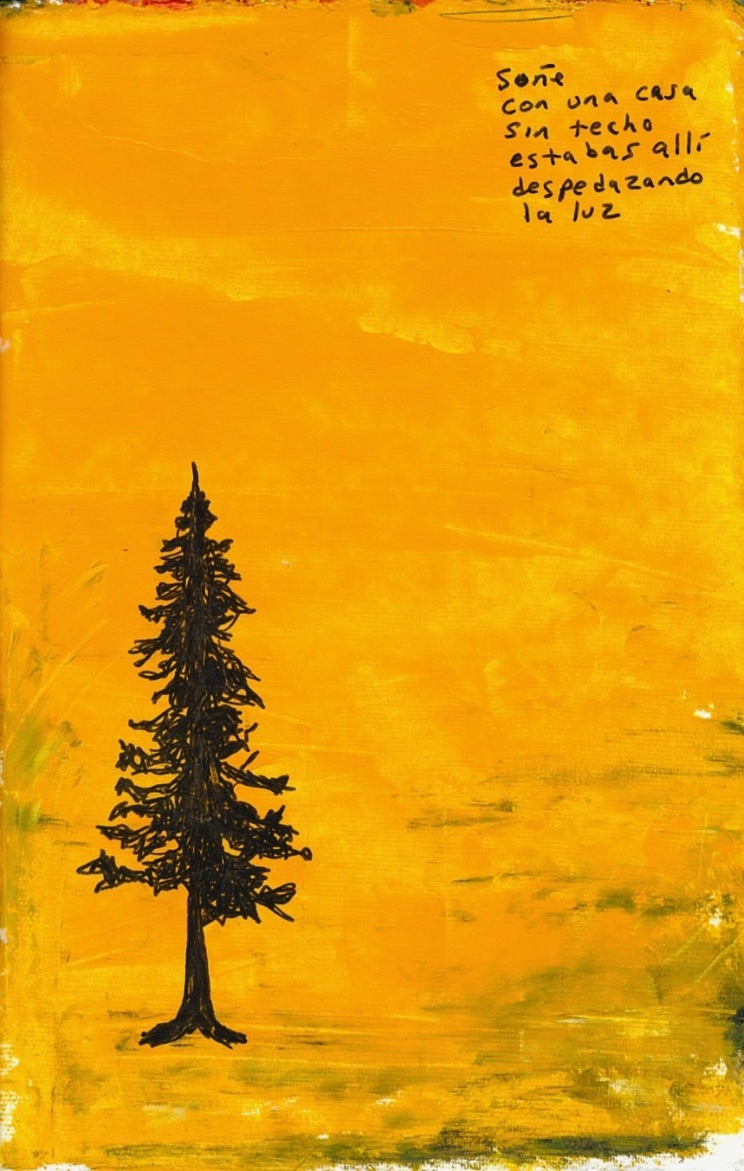 you
in my dream,
tearing the light
into pieces

“This is life,” you said.
No glory.
All terror.
What bullshit,
to say goodbye with the first kiss. 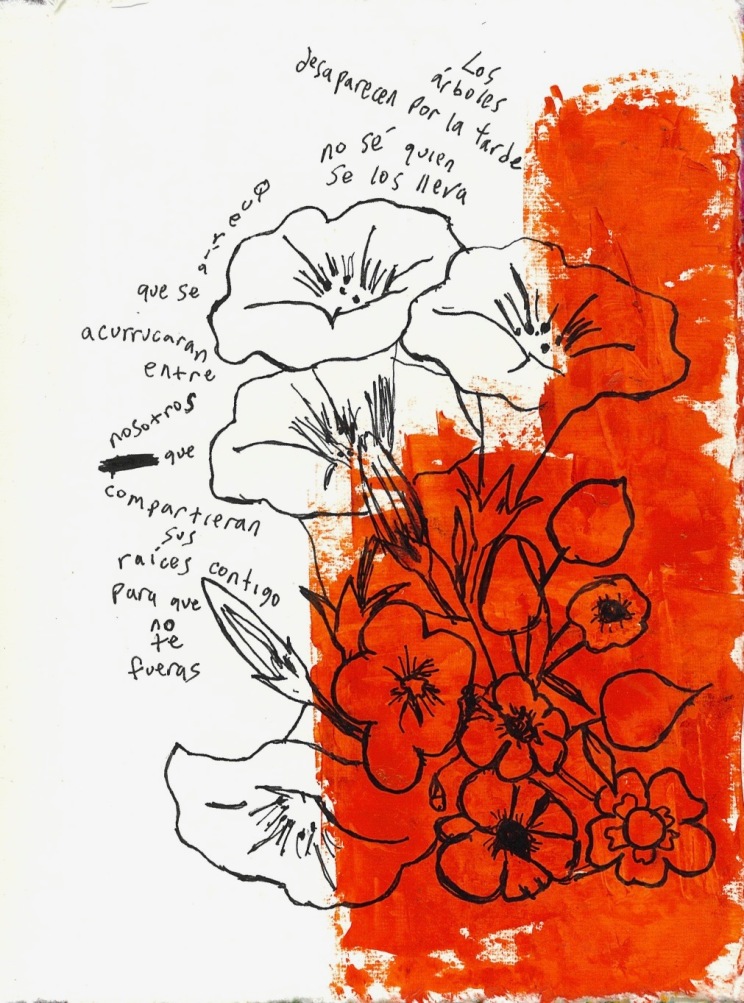 By mid-afternoon, the trees disappear.
I don’t know who takes them.
I wanted them to cuddle between us,
share their roots with you

so that you wouldn’t leave. 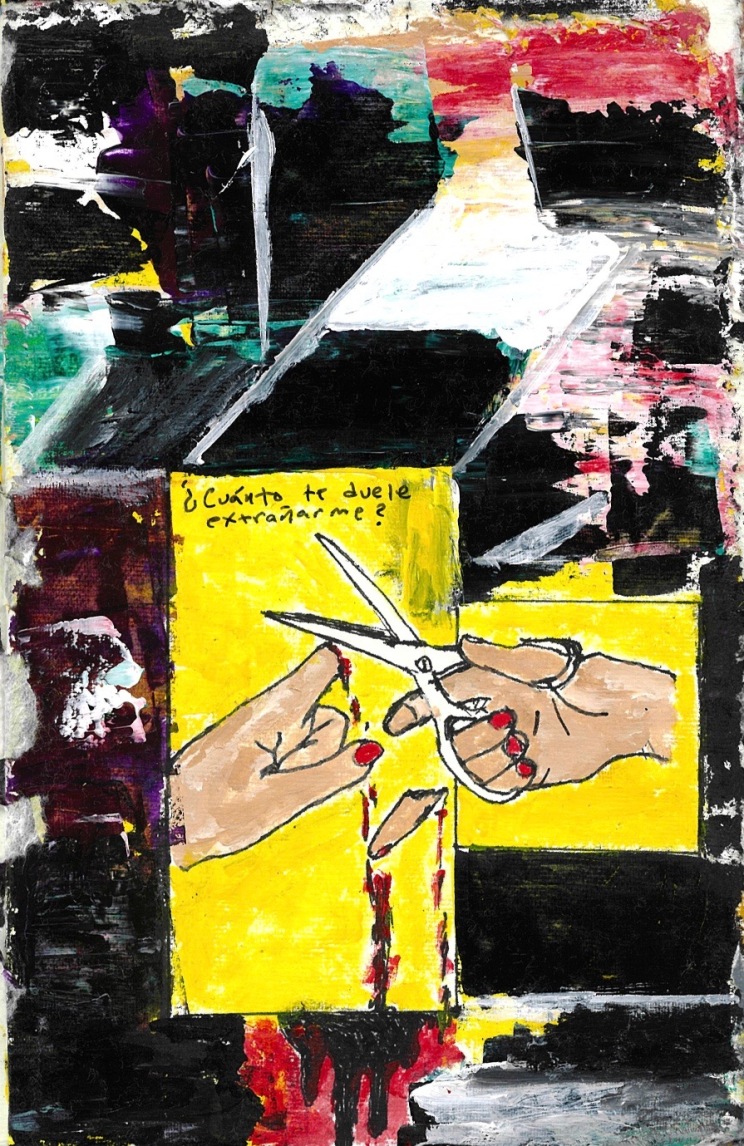 How much does it hurt you
to miss me?

For me to disappear
without reason
as I have always done
with others. 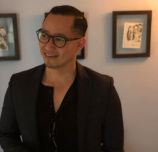 Octavio Quintanilla is the author of the poetry collection, If I Go Missing (Slough Press, 2014) and the 2018-2020 Poet Laureate of San Antonio, TX. His poetry, fiction, translations, and photography have appeared, or are forthcoming, in journals such as Salamander, RHINO, Alaska Quarterly Review, Pilgrimage, Green Mountains Review, Southwestern American Literature, The Texas Observer, Existere: A Journal of Art & Literature, and elsewhere. Reviews of his work can be found at CutBank Literary Journal, Concho River Review, San Antonio Express-News, American Microreviews & Interviews, Southwestern American Literature, Pleiades, and others. You can check out his Frontextos (visual poems) in Gold Wake Live, Newfound, Chachalaca Review, Chair Poetry Evenings, Red Wedge ,and Twisted Vine Literary Arts Journal. Visual poems are forthcoming in The American Journal of Poetry and in the print anthology of Newfound. His visual work has been exhibited at the AllState Almaguer art space in Mission, TX and at the Weslaco Museum. He holds a Ph.D. from the University of North Texas and is the regional editor for Texas Books in Review and poetry editor for The Journal of Latina Critical Feminism. Octavio teaches Literature and Creative Writing in the M.A./M.F.A. program at Our Lady of the Lake University in San Antonio, Texas. Check out his website: octavioquintanilla.com or find him on Instagram @writeroctavioquintanilla & Twitter @OctQuintanilla