We see a lot of works that involve the American flag at the museum of americana; the emblem acts as a stand-in for the country’s past histories, present politics, and future possibilities. Below are works that unpack, question, and scrutinize the symbol of the American flag and the vast prospect of meaning it is asked to hold. 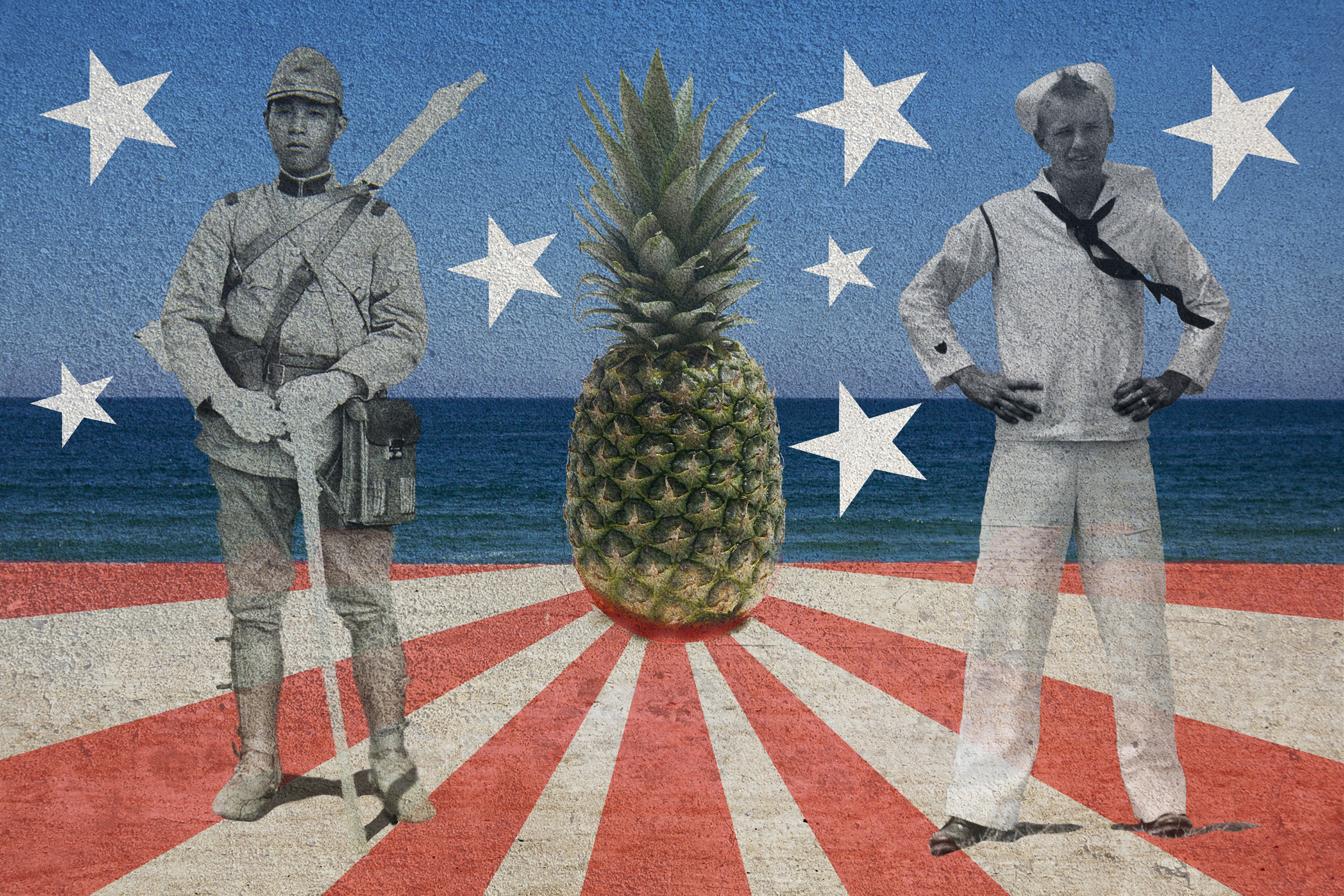 These collages are my way of seeking to join the disparate pasts of my bi-racial heritage. They are made from photographs old enough that most of the people depicted in them have become lost to time. The photographs speak of ages more foreign than distant lands; colonialism, tycoons, plantations, samurai, the jazz age, poverty, and world war. They represent the legacy of two families separated by a vast ocean who had no idea that one day their destinies would intersect.

In many ways they reflect the racial hodgepodge that most Americans today represent. A mix of DNA and cultural cuisines, prejudices, and values is passed down from one generation to the next. As time passes it is fascinating to observe what lingers and what disappears. Often language is the first thing to go. Yet we hang on to the myths and legends of the distant past and the lands our ancestors came from.

As cultures intersect it can be violent. Wars, conflicts, and exploitation are not strangers to this process. However, there are many good things that have come from people on the move. New ideas, opportunities, empowerment and knowledge are also part of this grand tableaux.

As I look at these old photographs, I try to make sense out the faces peering at me through a sepia haze. They have become empty signs that point to people that are no longer. They are relevant to me only by the names scrawled on their backs and the albums from which they have fallen. Like the early paleontologists assembling the first dinosaur skeletons, I must use my imagination to fill in the gaps, taking liberties to build narratives coherent to me. These old photos are combined with other photos gleaned from thrift shops and garage sales, as well as my own photos to help me understand who I am in the surreal context of America. I am constructing a narrative of my ancestry that is imagined and fanciful, but it is my own. 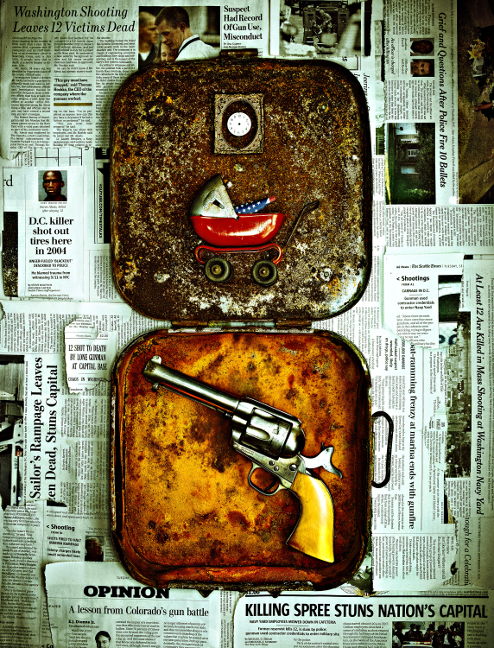 After my father passed away in 2007 and as I was going through his possessions, I came across 3 vintage handguns I never knew he had. Given the violence in this country’s current history, I was undecided at the time as to what to do with them. Torn between the fact they belonged to my dad and my feelings regarding US policy on gun control, I decided to just put them in a lock box and store them in the basement until I was in a clearer mind-set to make a good decision.

Jump ahead to late 2012 and the Sandy Hook shooting. My good friend and fellow photographer planned a road trip to do some shooting of our own, only with cameras. As was the custom with our travels, it provided a lot of time to talk. Music, family, photography, movies and the latest news were always part of our drives. The horrifying murders in Connecticut had recently happened and we were both depressed about the current state of affairs in our country. It occurred to me then, that I had never dealt with my father’s guns and I suddenly felt hypocritical having them. I told my friend this and that I was ready to get rid of them. After a few moments of silence his reply was, “before you do, you should photograph them”.

Jump ahead to early 2013. I had just treated myself to a year lease on a studio in Pioneer Square, Seattle, not really knowing what I was even going to do with it. After 35 years of commercial work, I never had a studio, as my assignments were always on location. Pacing around an empty space is intimidating to me, as there is then the responsibility to fill it. One day the conversation with my buddy came to mind and the next morning, I brought the guns to the studio and laid them out on the worktable. I basically just circled and stared at them for days. I didn’t have any emotional connection with them at all. I didn’t even know my dad had guns. I gradually brought out strobes and tried different approaches in black and white, but they all left me feeling indifferent. I had recently found a piece of rusty, painted metal that I planned to use for a portrait. It was square with a round yellow flaking shape in the middle. I laid the gun on top and took a test shot in color. It was then that something snapped. The image still didn’t really communicate anything to me, (other than being pretty) but I felt that I was going in the right direction. I would go on to use the guns illustrating my thoughts on the absence of sane policy in the United States. For the rest of that year, I spent hours upon hours wandering antique stores and junkyards looking for props to build the sets. The lighting became a paramount component of the 18 images that followed; harsh light, both frontal and from the side, with loud, tweaked and saturated colors.

The images are not subtle. Nor is the subject matter and the violence that we face every single day.

Stafford Hiroshi Smith is a 4th generation Japanese American who investigates his bi-racial roots through collaging together old photos from both sides of his family. Stafford has worked in Japanese television, American finance and now teaches photography at Grand Valley State University near Grand Rapids, MI.

Paweł Grajnert is a writer and filmmaker working in Poland and the US.