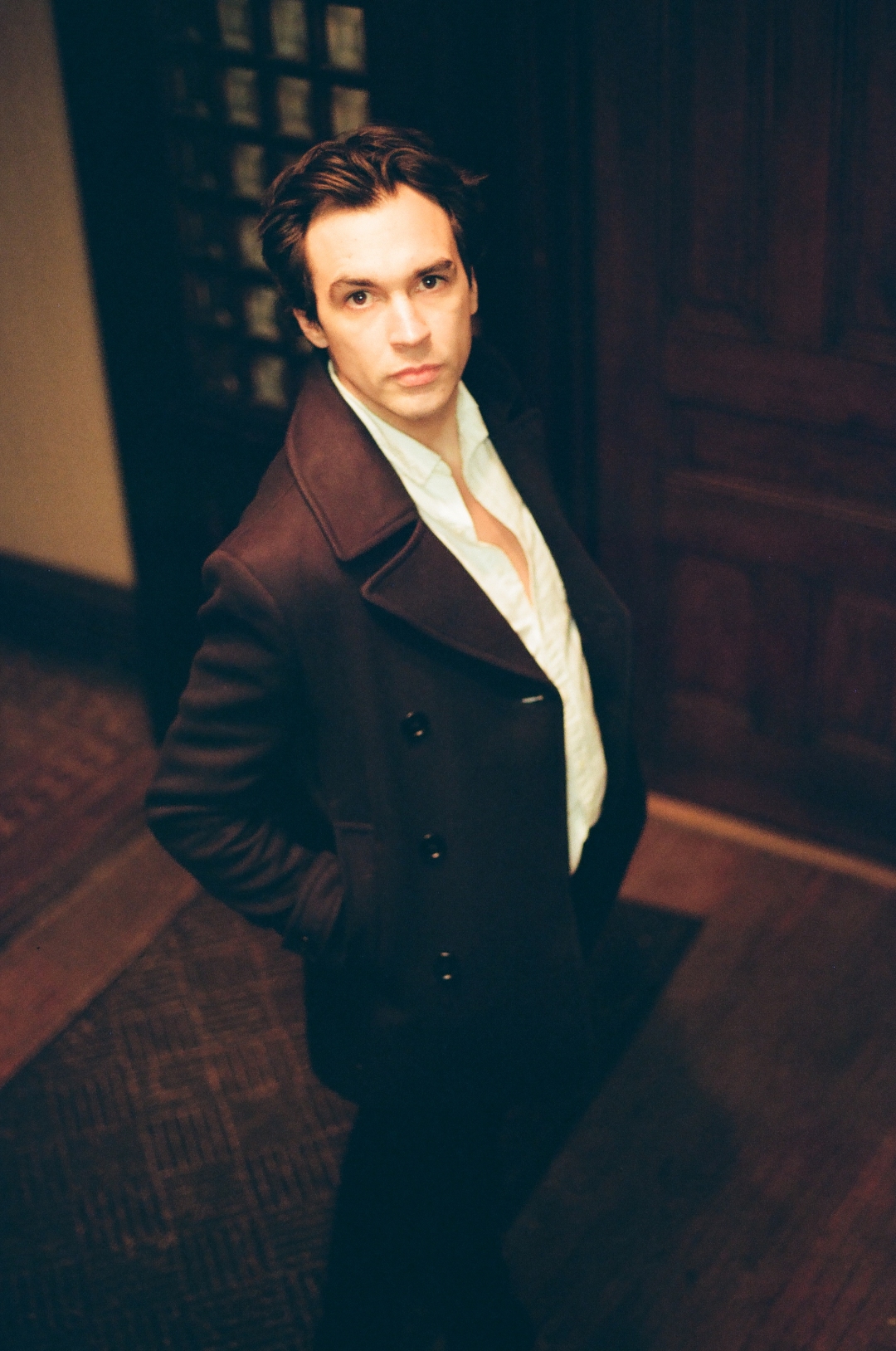 We play our respective sets. Ben has that Toledo rasp to his singing; he loses the melody line to the snarls in his voice in spots, creating an interesting effect that makes you listen up. After I’m done on stage, Stalets is on the back deck of the Lager smoking a cigarette and quizzing me about poetry, the relationship between poetry and song. He wants to know what I think of Leonard Cohen and Townes Van Zandt. His energy is intense, not quite manic. He tells me he likes Detroit, says I should come down to Toledo, his hometown, which is like Detroit but smaller, and play some time. It’s 2015, a few years until his life will truly demand prayers of his songs.

Stalets is on the big wooden front porch of the Victorian mansion in Toledo’ s Old West End where he and his girlfriend Noelle rent a room. The house is subdivided into eight units, and their place is really small. It’s good to get out of the claustrophobic space of the apartment and hang out on the expansive porch. A few of his favorite Toledo pickers come by, among them the novelist AS Coomer who has a long mane of blonde hair tucked up under a bandana and is covered in tattoos. Coomer wears a tank top and cut-off corduroy shorts. Vester Frey is there too, slide-picking an open-tuned dobro and singing old-timey songs. I sit down in a dented-up steel wheelchair that comes from a long-closed place called “The Greater Medical Center of West Ohio.” At one point I ask Ben to play “Caroline (O-HI-O).” I guess I’m in the spirit of being down there and want to hear the song that he always ends the night with, getting all the drunks to sing along — I’d rather be in Ohio. Ben demurs. Noelle is on the porch, and I think the song references an old girlfriend. He’s also tired of the damn song and doesn’t want to sing it in his downtime. It’s a good session despite the thwarted request.

Stalets stands on a table at the Village Idiot in Maumee, Ohio, playing a screaming solo on a red Guild S-100 electric guitar. Lots of feedback from a whining Fender Reverb while his drummer and bassist try to hold together the frayed rhythm of this decohering song (I think it’s “Our Own Sweet Time”). I opened up the show solo. Nobody listened. The crowd isn’t exactly enjoying Stalets’ schtick either. They seem more baffled than anything. The small-top table sways precariously, and just as I think he’s gonna break his neck, he hops off the table and back onto the stage in time to shout, Beware of what comes tumbling down, it could be the gods’ embrace.

We end the night at a Waffle House in West Toledo. I tell him I think he writes great lyrics but don’t understand all his stage antics. And it’s true, I love a lot of those songs. I’m trying to sell him on reading the great Ohio poet James Wright. I attempt to remember lines from “A Blessing” and “Lying in a Hammock at William Duffy’s Farm in Pine Island, Minnesota.” I have wasted my life, I muster. He asks me why I said that. “Never mind,” I tell him.

Stalets is on stage at the Gaelic League in Detroit, singing songs in-the-round with Drew Coomer and Craig James. We billed it as “Detroit vs. Toledo,” one set by three songwriters from each city. Don Duprie wore boxing gloves and took a picture at the firehouse where he works, and we used that image for the flyer. The event is just an excuse to get everyone together, but the Detroit crowd is into the idea that there’s some kind of competition going on. They want Don Duprie, Alison Lewis, and Ryan Dillaha to destroy our Toledo guests. The Toledo guys even elicit the occasional boo during their set. AS Coomer sits in the middle, baffled by whatever the hell he’s gotten himself into here tonight. Stalets is thriving on the raucous nature of the affair. He hops up during the Detroit set to sing along to the chorus of Don Duprie’s “What Am I Supposed to Do?”

It’s a strange, fun night. I tell the Toledo songwriters they should host one down there, but it never materializes.

Stalets is on page two of the Toledo Blade, some story about a federal investigation. Ben Stalets, 28, of Toledo . . . As numbers begin to modify proper nouns, we sense the subject getting closer to catastrophe or cataclysm, and there is a subtle difference between the two. Jail, ignominy, rebirth. It’s the syntax of criminality, haunting in conjunction with a name we know, in the way it defamiliarizes the familiar. An age appended to a name, not so young but not so very old. All Stalets tells any of us about his case is that he’s got good lawyers and he’s in it for the long haul.

Stalets is standing on another table, this time at the Ottawa Tavern, hometown crowd; he’s shoving the microphone in their faces for some call-and-response rock thing whose lyrics I can’t make out. He’s bounding through the place like Iggy Pop, bruising and scraping himself up in the process, groveling around the hollow drum of that barroom with that graceless grace we’ve come to associate with rock n’ roll singers from the rustbelt. The song doesn’t so much end as fall apart in a threnody of feedback.

The next song he plays is more subdued, a new one called, “EGBA (Everything’s Gonna Be All Right).” Damn Noelle, how’d we get so lucky? I know this one’s hard, so you’re gonna have to trust me. Everything’s gonna be all right. It’s nothing he can actually believe at this point. It’s a prayer he hopes might come true if he repeats it assiduously enough. Everything’s gonna be all right. Every chorus is an epistle; every epistle is a prayer. Some prayers come true. Some parallelisms offer little reassurance.

Noelle is on her way to Dayton. She and Ben aren’t together yet. It’s a decade ago. It’s the anachrony of story to say that, to try to sort the time. Ben rides along to see his friends whom he doesn’t care about seeing. (He just wants to be close to her. He just wants to be close to her. He doesn’t want to go to jail.) Bad accident on the way back to Toledo. Noelle is in the hospital. Ben has a serious concussion. A few years later, she’s his booking agent, then girlfriend. It’s mind-bending anxiety to get in the van and hit those little towns after the accident, but as Ben writes in “Rock N’ Roll Song,” It’s worth the beer tickets when they shut up and listen.

Ben is in federal court. He needs character letters in the lead-up to his sentencing. He asks me to provide one. I’m supposed to tell the judge something about Ben that he wouldn’t necessarily know from the facts of the case. I tell the judge that Ben’s spirituality leads to his belief in contrition, redemption, and grace, and I think of Ben as a kind person with a good soul. There’s no doubt that he’s also a strange bird with strange lyrics, that he’s been humbled in having to reckon with how much he almost pissed away his talent and his love for a dumb scheme that could now land him in federal prison, but I don’t mention these latter items in the letter.

Stalets is not in jail. He has managed to record a new album called Everybody’s Laughing with producer Bunky Hunt of Whistle Pig Records. This isn’t a story of perseverant art, unless you want it to be. What would any of us be laughing about? I wonder. Why is Stalets telling us jokes that only the band will get?

One of the worst songs on the album is called “Words.” The theme is that words without action are meaningless. It’s a bit solipsistic in that it’s difficult to know who or what Stalets is railing against here. Words are not noble, he repeats in the hook after every verse, a straw man leveled at the notion that language possesses an inherent nobility. Words are only words, and I’m dumb today, Stalets brays in the refrain. It’s how one might feel after listening to a phenomenal album by a songwriter forging anxiety, fear, and nonsense into art. If we ever get another late night at that Toledo Waffle House, I’m gonna slip him a copy of Samuel Beckett’s The Unnamable, lest he believe he’s sobered up this laughing banality, lest he believe any of these baffled sentiments are new.

Cracking the egg that is Ben Stalets is two yolks; the first is a country-tinged, folk-soaked, lyrically-driven song. The second is a sweaty, rock n’ roll-rooted performance. However you prefer it, you’ll end up full. Ben’s medley of soundscape has allowed him to open for a diverse collection of critically-acclaimed acts such as Justin Townes Earle, Damien Jurado, Cory Branan, Daniel Romano, Valerie June, Whitey Morgan, Reverend Peyton’s Big Damn Band, Local H, and Icarus Account. He’s also been a staple at classic music destinations like Nelsonville Music Festival, and as a return guest on Knoxville’s Blue Plate Special. His record Everybody’s Laughing is forthcoming from Whistle Pig Records in August 2021.