the museum of americana is an online literary review dedicated to fiction, poetry, nonfiction, photography, and artwork that revives or repurposes the old, the dying, the forgotten, or the almost entirely unknown aspects of Americana. It is published purely out of fascination with the big, weird, wildly contradictory collage that is our nation’s cultural history.

We live in an era when it is fashionable to express either apathy or outright disdain for all things American.  the museum of americana was founded on two core beliefs. The first is that there is much to love and celebrate in historical American culture. The second is that, while certainly not all aspects of Americana ought to be praised or celebrated, there is still great value in holding even that which is embarrassing or difficult up to the light to see what it is made of—and what could possibly be made of it.

the museum of americana will appear three times a year, in the winter, summer, and fall. 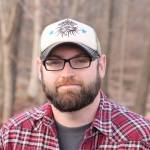 Originally from the flatlands of central Illinois, Justin Hamm now lives near Twain territory in Missouri. He is the author of a full-length collection of poems, Lessons in Ruin, and two poetry chapbooks, Illinois, My Apologies and The Everyday Parade/Alone With Turntable, Old Records. His work has appeared, or will soon appear, in Nimrod, The New York Quarterly, Cream City Review, Spoon River Poetry Review, Sugar House Review, and a host of other publications. Recent work has also been selected for the 2013 Stanley Hanks Memorial Poetry Prize from the St. Louis Poetry Center. Justin earned his MFA from Southern Illinois University Carbondale in 2005. You can find more information about his poetry and other creative activities here.

Lindsey Griffin hails from the Chicago area. She holds an MFA from the University of Miami and is a graduate of the Lighthouse Writers Workshop Book Project. Her fiction has appeared in, or is forthcoming from, Epoch, Cimarron Review, Epiphany, Image, Midwest Review, and other journals. She lives in Iowa.

Karrie Waarala hails from Michigan, where she curates and co-hosts the Skazat! Poetry Series and lives with and is vastly outnumbered by her books, pets, and circus memorabilia. Her work has appeared in journals such as Blackbird, Iron Horse Literary Review, PANK, The Collagist, and Southern Indiana Review, and she holds an MFA from the Stonecoast Program at University of Southern Maine. Recipient of the 2012 Pocataligo Poetry Prize, a Best of the Net finalist, and a multiple Pushcart nominee, Karrie has also received critical acclaim for LONG GONE: A Poetry Sideshow, a one-woman show based on her collection of circus poems. She really wishes she could tame tigers and swallow swords. For more information, visit Karrie here.

Lauren Alwan’s fiction has appeared or is forthcoming in The O. Henry Prize Stories, The Southern Review, StoryQuarterly, the Alaska Quarterly Review, the Sycamore Review, and the Bellevue Literary Review as the recipient of the Goldenberg Prize for Fiction. Her essays have appeared in ZYZZYVA, the Northwest Review of Books, The Rumpus, and The Millions, and have been recognized as Notable in the Best American Essays (2016). She lives in Northern California. Learn more here.

Ann Beman, co-publisher and nonfiction editor of Tahoma Literary Review, has been writing a book about thumbs forever. Or at least since she earned her MFA from the short-lived but sweet Northwest Institute of Literary Arts. Her work has appeared in DIAGRAM, The Literary Review, Bombay Gin, Stone’s Throw, and Canoe Journal, among others. She lives in California’s Sierra Nevada with her husband, a chihuahua, and two whatchamaterriers in Kernville, on the Kern River, in Kern County. Cue the banjoes.

Cal Freeman was born and raised in Detroit, MI. He is the author of the books Brother Of Leaving (Marick Press) and Fight Songs (Eyewear Publishing). His writing has appeared in many journals including New Orleans Review, Passages North, The Journal, Commonweal, Drunken Boat, and The Poetry Review. He is a recipient of The Devine Poetry Fellowship (judged by Terrance Hayes); he has also been nominated for multiple Pushcart Prizes in both poetry and creative nonfiction. He regularly reviews collections of poetry for the radio program Stateside on Michigan Public Radio. He is the lead singer and chief songwriter of the Detroit-based Americana group The Codgers.

Sue D. Gelber is a New Englander turned Chicagoan now living in Colorado where she writes fiction, humor, and grocery lists. Her work has appeared in several publications including The New Yorker Daily Shouts, McSweeney’s Internet Tendency, Electric Literature, The Belladonna, The Chicago Tribune, and Weekly Humorist. You can track her down at suedgelber.com or follow her on Twitter at @suegelber.